When Luke and I met he was a big time potato bread fan and it was pretty much his go to bread of choice. I have always been a wheat bread fan. Over time my bread preferences won out and Luke’s love of potato bread was replaced by his love of wheat bread.

For the second week of the bread challenge decided it was about time that I made my first loaf of potato bread. This was actually my first go round with straight white bread. Despite my urges to substitute some whole wheat flour for the all-purpose flour I followed my rules and stuck to my chosen potato bread recipe. The recipe this week is King Arthur Flour’s Potato Bread.Our thoughts:

Coming out of the oven these loaves were beautiful and they smelled amazing. The house was filled with a sweet doughy scent. The tops of my loaves browned a bit too much so I had to cover the loaves for the last 10-15 minutes they were in the oven. When I first cut into our first loaf I was very pleased at how easy it was to slice into perfect slices. Luke and I both agree that this bread was a little too sweet but it was nicely balanced between dense and light and fluffy.

This recipe some time to make and took about 45 minutes of hands on time. The recipe called for a double rise. The first rise took place in the refrigerator over night, for about 16 hours. The second rise was supposed to take about 4 hours but ended up taking the better part of a day. After the final rise the bread baked for 45 minutes. From start to finish, this potato bread took more than 24 hours to make, due to the length of both the first and second rises. 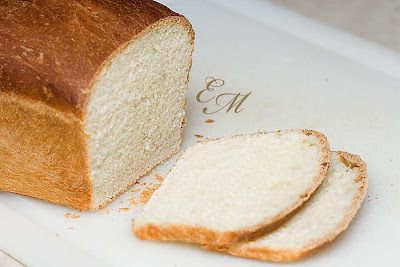 The ingredients are very simple, inexpensive and most likely in an average kitchen. The instructions were easy to follow. The recipe said it would make 3 loaves but the amount of dough was better suited to making two larger loaves than three.

Knowing that potato bread was going to be this weeks bread I planned grilled cheese and soup for one of our dinners. The potato bread grilled up beautifully. For sandwiches the bread sliced very nicely. And this potato bread made for great breakfast toast as well. I think this recipe is pretty versatile.

So will we make it again? Maybe. Although this bread was very tasty and sliced so great it did take quite a bit of time to prepare. I was a little put off by the amount of time this loaf took but once the smell of the bread baking filled the house my feelings started to change.This recipe is not complicated at all and the only downside I can come up with is the length of time it took to make from start to finish.

No Matter How Old He Gets, He’s Still the Baby.

Alright Moms, How Do You Pamper Yourself? I have always wanted to try potato bread, might just have to bake some

i can tell you right now that this would be a huge his in my house. we do lots of grilled cheese, sandwiches and toast. but again, i am so intimidated by the time investment. i thought of you yesterday as i was channel surfing and came across an old julia child episode and she had a special guest making some kind of crazy bread where they had to beat it 800 to 850 times!!!!!

Store-bought bread is just so darn cheap and easy to grab, but you're right – everytime I make a loaf from scratch I remember why the effort is so worth it.

It is just after 10 in the morning and I read this post. I really am very hungry for grilled cheese sandwiches after reading it's not even lunch time yet.
Way to go spending time making awsome good food for your family. I have seen your trim family eat and those 2 loaves will not last long.
I am impressed with your dedication to bring health and homemade foods to both your family and mine. Thanks so much for making me hungry :).
Mom